In "Bad Girls" the following exchange takes place in Mayor Richard Wilkins' office between His Honor, his chief henchman, and the Deputy Mayor:

MAYOR: I, I just love the Family Circus! That P.J., he's getting to be quite a handful. (looks at swords) Well . . . I haven't seen anything like this in, uh . . . Well, a good long while. Where's the owner of these fine implements?

TRICK: The common term is 'slain'. But I've been seeing this breed around. Are we expecting any trouble?

TRICK: Nobody can tell Marmaduke what to do. That's my kinda dog. 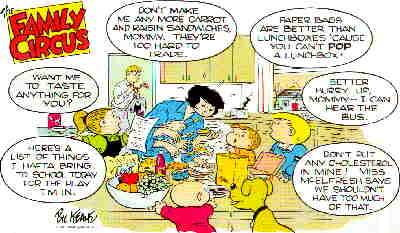